Arjeplog: A hotel igloo with room for art and new ideas

A unique hotel igloo appears at Krajaudden
in Arjeplog for the fourth year.
Art plays a prominent part, and the themes
for 2017 were the threat to the Arctic environment
and the 17th-century attack on the Sami and their culture.
Here’s a look inside the big igloo that lives a short
life between January and April. 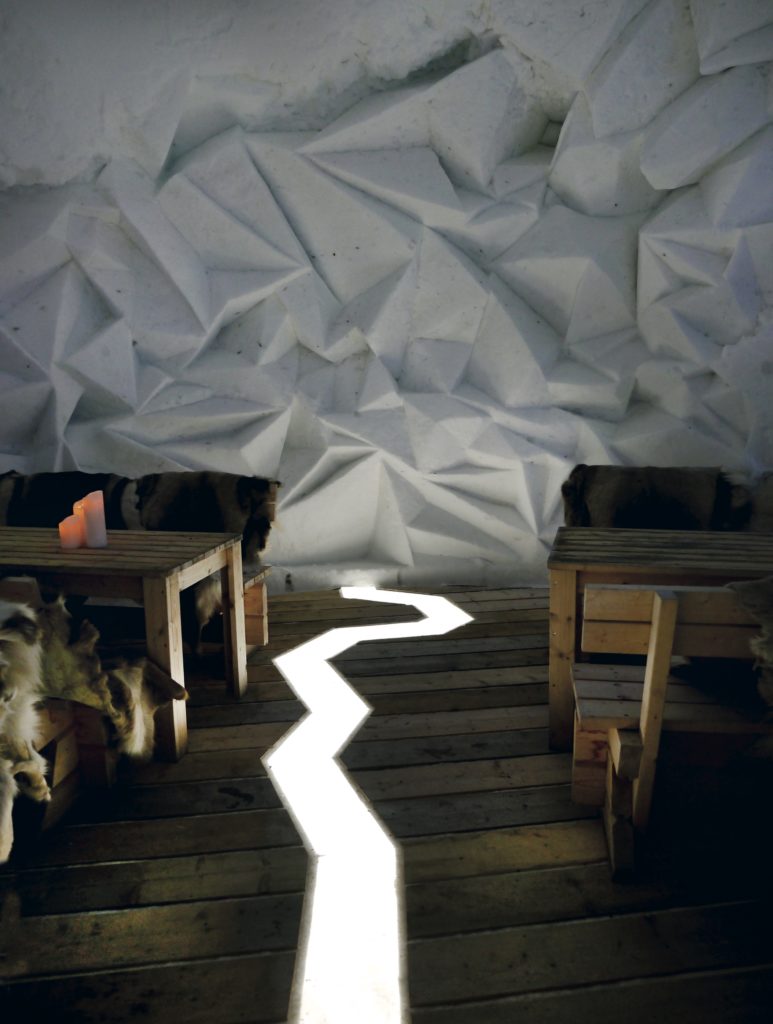 A ribute to the Silver Road and maining in Arjeplog. Foto Maria Söderberg

Snow caves have always challenged and fascinated people. This is especially true of those who live in an Arctic climate where igloos have been essential for survival.
Igloo means ‘house’ in the Inuit language. Now anyone can try out that house feeling, but in a different format. In Arjeplog, beside Sweden’s deepest lake, Hornavan, the German company FlyCar has built an igloo with ten
bedrooms, a bar, specially built rooms for dancing and meetings. With an area of a thousand square metres, the igloo has been given the name “Iglootel”, and it is run in colla-boration with Silver Resort.

It will soon be operating for its fourth year. Everything is built up from the ground each year, with snow cannons and big balloons to create the different rounded rooms. In April, however, the natural melting begins, and in June there is not a trace left of the big snow building.
The decoration with art installations may seem daring, especially because the motifs have to do with the history of northern Scandinavia. Hans Präffcke, professor of art at the Art & Crafts Academy in Aachen, has been responsible for the project.

“By placing a Sami drum and being inspired by jojk in
the first room, we want people to be affected, or to imagine
how the shaman through the drum makes contact with
the forces of nature.”

This year´s art theme was a way to honour the indigenous peoples of the Arctic region. It showed how the enforced conversion to Christianity hit the Sami and their culture. Another theme was the threatened Arctic environment. Since everything could only be seen for a short time, it is in the photographs that the works are preserved.
“By placing a Sami drum and being inspired by jojk in the first room, we want people to be affected, or to imagine how the shaman through the drum makes contact with the forces of nature,” says Hans Präffcke.
“When the Sami were forcibly converted, both the drum and the jojk were forbidden.”
It was the art student Viviane Vockroth who did the decoration of the entrance.
“I chose the pattern on the drum because it was so special,” she says.

Her inspiration came from the drum on show in the Silver Museum in Arjeplog. In the same room you can hear the sound of jojking. There are also sejte from what may once have been Sami offering sites.
“But it is not the pattern on that drum that you see in the Iglootel. It’s the one in the Museum für Völkerkunde in Dresden.”
The motifs of game birds, furred animals and fish are believed to indicate that the person who once owned the drum was more interested in hunting and fishing than in reindeer herding. It was probably used in the lands of the Lule Sami and came to Germany in the 17th century. According to the museum in Dresden, the drum was a gift to Prince Johann Georg II of Saxony in 1668 from Duke Christian Albrecht of Holstein-Gottorp. 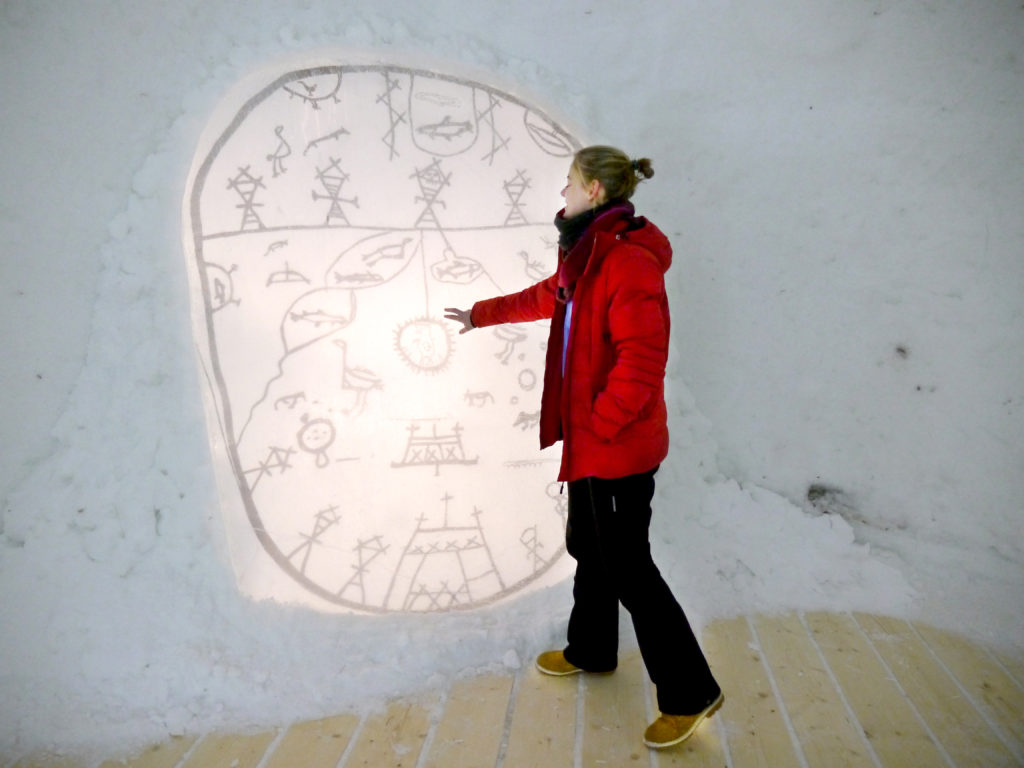 “It can increase interest in the geographical area where we are located, said Andrea Fritsche from Iglootel in January 2017. The patterns of the Sami drum was shone towards us in the first room of the igloo. Photo Maria Söderberg

The prince had his seat in Dresden, which may explain why the drum still survives, although now in a museum where it can be seen by the public. But how could a duke in present-day northern Germany get hold of a Sami drum? To understand this you have to look at the family tree: Christian Albrecht was brother of the Swedish Queen Hedvig Eleonora of Holstein-Gottorp, which is probably why the drum travelled south. Owning a Sami drum must have been considered really exotic at this time. The more painful and sorrowful background is the destruction and collection of Sami property by the Church with the support of the crown. Today only about 70 drums survive. They were regarded as pagan and at that time it was illegal to own a drum and practice the traditional Sami religion.

In the passages of the Iglootel, the longest of which was sixty metres, the Sami motifs recurred, along with words from places with indigenous peoples. There were texts in Latin, Cyrillic and Inuit carved in the snow walls. In Russian, for example, we could see the names Chukchi, Yakut and Enets.
Russian returned in one of the overnight rooms in the Iglootel. All ten were beautifully decorated with themes, and in one of them the snow walls imitated the pattern of permafrost. As the thick ice melts, it releases the green-house gas methane into the atmosphere. This hastens global warming. With a picture from the Russian Arctic, the art students from Aachen made a graphic image which was then applied in snow.

All the bedrooms had a special wardrobe. Hans Präffcke describes how the ice blocks with sticks can be interpreted.
“We have thought of them as frozen flowers stuck in ice.”
Other themes were almond potatoes and their white flowers. This kind of potato is often associated with northern Sweden and is considered a must together with the national dish of Norrbotten, sour herring. Almond potatoes grow well in a cold climate.
One room was on the theme of cloudberries, which the art school regards as another landmark for Lapland, and in yet another room the pattern copied the wings of a wind turbine. The Siberian larch, which grows in permafrost areas, was the subject of one room. 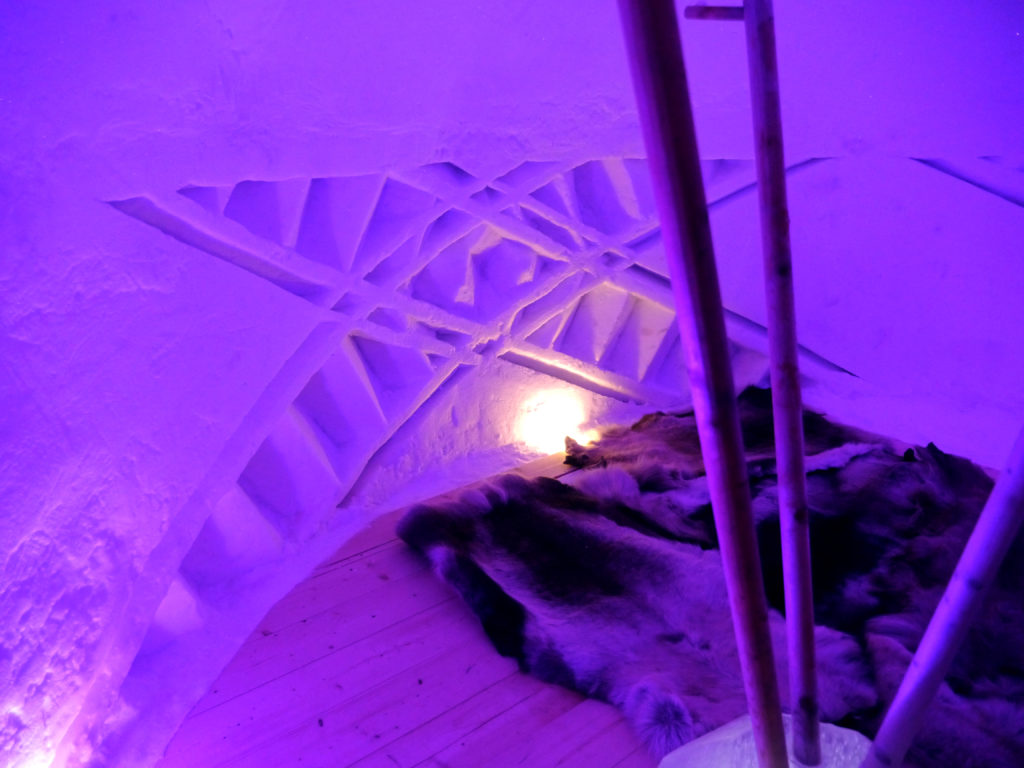 Snow-mobile tracks in one room. One of the artistic ideas was to describe forms of transport in the Arctic area. Photo Maria Söderberg

Another room was decorated with snow-mobile tracks. One of the artistic ideas was to describe forms of transport in the Arctic area. Besides the more modern snowmobile there were carved pictures in one of the big rooms showing skiers.
“In Russia there is evidence that people have used skis for more than eight thousand years. We have also chosen to highlight dog teams on the wall here.”
In this room which could hold about forty guests there was a narrow passage, half a metre high and 30 cm wide, leading to the Iglootel’s most central room, the Igloobar. The illuminated eight-metre long passage symbolized the Silver Road, road 95, between Skellefteå and Bodö. This continued the theme of transports, as well as the silver mining in the Arjeplog mountains in the 17th century. The passage ended with an imitation of a mine face on the snow wall.

The bar had egg-shaped niches with snow benches covered with reindeer skins. The pattern of the bar came from the Morse alphabet, expressed as bar code. In the room you could experience the muffled sound inside an igloo. The people who designed the seating envisaged that private conversations could be held there without reaching anyone else’s ears.
In an adjacent room there was a stage and a dance floor. A big screen with a projector allowed special sound and light effects. The light painted the snow walls all the colours of the rainbow. The whole of the Iglootel was filled with an explosion of colour, and overnight guests could select the colour they slept best in.

When we met Andrea Fritsche in January 2017 for a guided tour, she was working her third season in the unusual snow building in Arjeplog and was still fascinated with it. She thought it important that the hotel uses Sami forms of expression in its art.
“It can increase interest in the geographical area where we are located.”
The patterns of the Sami drum shone towards us in the first room of the igloo. Symbols of fishing and hunting, something in the middle that is probably a sun, and what could be gods in human form above the upper lines on the drum. An offering place.
There is still much to learn about the message of the drum.
Not a long time has passed between the loss of an earlier culture and today.
Now we are waiting to see what next year’s snow hotel will have to offer in the line of art.