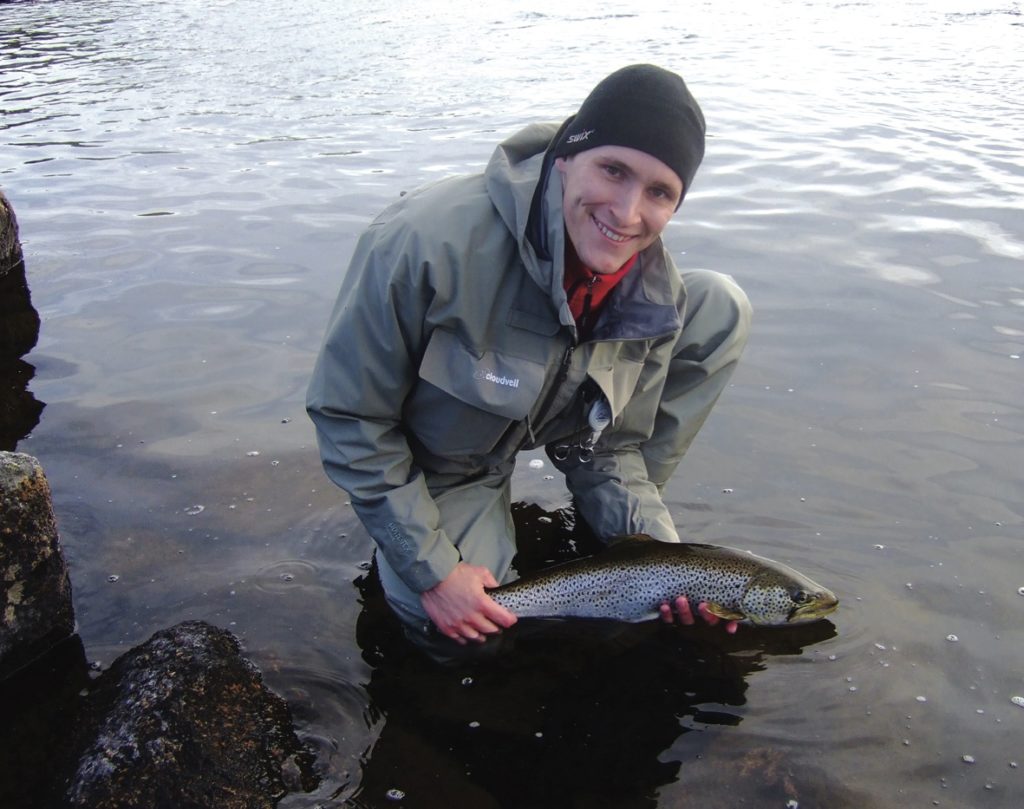 “Grandfather showed me how to fish, and I remember that I did a lot of fishing that summer,” he says with a smile. “You don’t want to hurt the fish more than necessary, and sometimes it can actually give you more pleasure to put a fish back than it would have done in the frying pan,” says Andreas Lestander. Foto Kristoffer Eriksson

Andreas Lestander’s main hobby is fly fishing.
He makes preparations all winter.
Magasin Silvervägen met him for a conversation
about Klinkhåmern, about responsible fishing
and about Saudi Arabia.

Name: Andreas Lestander.
Age: 25.
Born: Arjeplog, father from Laisvallby and mother from Arjeplog. Has a cottage in Laisdalen.
Interested in: Photography, nature, knives, cooking and fly fishing.
Favourite food: Barbecue.
Favourite drink: Takes a keen interest in whisky.
Favourite film: The Shawshank Redemption by Frank Darabont.
Always in the kitchen: Garlic – “the intellectual’s ketchup”.
Never in the kitchen: a dull knife.
Unorthodox food combination: crispbread with curry sauce and a pepperoni or two. It actually works.
Dish to impress: a really bloody piece of meat, preferably beef or game, always goes well with a salad.
Kitchen hints: always let the meat reach room temperature before cooking it.
Andreas’s best fish recipe: Newly caught grayling with salt. Stuff the fish with birch leaves and then grill it in foil. Add a little butter if you have any. When the fin loosens slightly it is ready and it tastes simply wonderful!

On dark winter evenings, Andreas Lestander sits at home on Drottninggatan in Arjeplog, tying lures that look like insects. And he longs for the summer, of course, when he will be able to test the flies and see how good they are.
Hopefully he will catch the occasional fish. Then, when he has outwitted the fish, he has successfully achieved a goal. Andreas talks enthusiastically about fishing, which is his great passion. An important aspect is fishing responsibly.
“Fishing is about so much. To begin with, you have to present the fly right and get the fish to bite. Then you have to play it and win the fight. If the fight takes a long time, the fish should not be put back in the water too early. The fish is badly affected by lactic acid and can die of injuries caused by being released too early. Instead, if you pull it slowly back and forwards as it is resting, it revives faster because fresh water is pumped through the gills. A dead fish lying on the bottom is a waste of potential and food,” he observes bluntly.

Andreas’s grandfather built a cottage on the lower course of the Laisan in 1956, and last summer Andreas added a sauna to it. He grew up in Arjeplog but also spent a lot of his childhood in Riyadh, Saudi Arabia. At the age of five age he moved with his family to Saudi Arabia because his father got work there as workshop boss in a big company. They lived there in an enclosed compound of roughly the same size as Laisvall, with a couple of hundred households. They spent their summers in Sweden, mostly with grandmother and grandfather in Laisvallby. That was where he was introduced to fishing.
The time in Saudi Arabia was hot, as much as 35–40 degrees Celsius. Andreas returned from the Middle East at the age of twelve, and since then he has lived in Arjeplog.
“Grandfather showed me how to fish, and I remember that I did a lot of fishing that summer,” he says with a smile.
His face takes on a special look when he talks about fishing; his brown eyes look even friendlier, if that were possible, and he shows small film clips he has shot when out fishing with friends. Not being an angler, all I can see is a fish. Andreas, on the other hand, sees a beauty “that you can get lost in”.

“My favourite fish are grayling and salmon trout. The salmon trout is very beautiful with its leopard spots and yellowish belly. The grayling is more greyish-purple in colour and it’s particularly beautiful when it stretches out the big sail on its back,” he says.

When Andreas fishes, he lets a lot of fish go again. They can be important fish for breeding,” he says, “a top predator” in the water. “It’s not always the biggest fish that taste best.”

“In terms of food, half a kilo is tastier than a fish weighing five kilos. There’s a difference in the quality,” he says and explains why he lets so many fish go.
“It’s not sustainable if a lot of people catch twenty fish a day. As a rule I think that people fish responsibly, but it happens that they catch fish that are too small, and then it’s better to let them go again so that they can grow a bit”.
To the great disappointment of Andreas’s sister, he rarely comes home with fish, because Andreas prefers to enjoy it in the open air – newly caught and grilled.

He fetches boxes of flies and shows his work. They are beautiful and skilfully put together. Some look like real insects, others are less plausible, but they are all lovely to look at. There are different flies for different seasons and different angling methods. They are consumable supplies, and he has to make new ones all the time. Sometimes the fly comes loose from the leader, the line attached at the far end of the fly line to which a fly is then attached. He laughs as he tells me this, but it does not appear to bother him in the least.
Some flies take six or seven minutes to tie, other can take up to twenty minutes. Andreas finds it most interesting to fish on the surface and on the bottom. Some flies last longer, others are made of more fragile feathers. He gets a lot of inspiration from the way others have made flies, and sometimes he starts from a pattern but then gives it his own twist.
He has no single favourite fly, but there are some that he always has in his box. One example is the realistic-looking Klinkhåmer.
“It is very visible, durable, and it catches a lot of fish.”
I hear from someone else that Andreas is one of the best in Sweden at tying flies. And when he lines up his creations on the kitchen table I understand why. They are all like small works of art, beautiful, delicate and hard to take your eyes off. You just want to investigate them to see exactly how they were made.
He shows a dying mayfly, another made of synthetic material and yet another that is supposed to resemble a European bullhead. The variations seem endless. But he says that things that look beautiful in the box are not always what the fish like best. He believes that any type of fishing can be done with flies, apart from deep-sea fishing of course. He also talks about fishing in a way that causes minimal trauma to the fish, for example, through flies without barbs. these have hooks without the backward-pointing little point that makes it hard for the hook to come loose. It takes a different technique, but it does not harm the fish as much as an ordinary hook.
“You don’t want to hurt the fish more than necessary, and sometimes it can actually give you more pleasure to put a fish back than it would have done in the frying pan,” he says.
How many flies has he tied?
“Oh, I’ve no idea. Far too many to keep count.”
He ends the conversation by saying that he is longing for the summer. And he longs for the valley of his dreams – Laisdalen.

The primeval mountain forest of Laisdalen is a large nature reserve – 100 kilometres long, located on either side of the River Laisälven. Here you meet a wild and magnificent forest that climbs slowly up towards the treeline. It mostly consists of alpine conifers. Downstream the dominant tree is spruce, while upstream it is pine. Large areas are real primeval forest, untouched by forestry. The coniferous forests mostly grow on rich alpine bedrock. That is why we find here lush areas with tall herbs such as alpine blue-sow thistle and wolfsbane. The alpine birch woods are often luxuriant at higher altitudes as well. In upper Laisdalen and in the former forest reserve of Veddek there are rich fens with many calcareous plants. Intermediate hook-moss, Meesia moss and thick-nerved apple-moss are three rare species.

At big lakes you can find Jämtland dandelion and tall Jacob’s-ladder. Large predators such as bear, wolverine and lynx live in the reserve. Along the rivers there is a stable stock of otter. For thousands of years the Sami have lived in these lands in interaction with the reindeer. The mining era of the seventeenth and eighteenth centuries in Nasafjäll brought new people, and virgin land was cultivated as a result of the many settlers. In the middle of the area is Delliknäs, a settlement established in 1892. This gives you a glimpse of the toilsome life of a settler.
(Facts from Norrbotten County Administration).