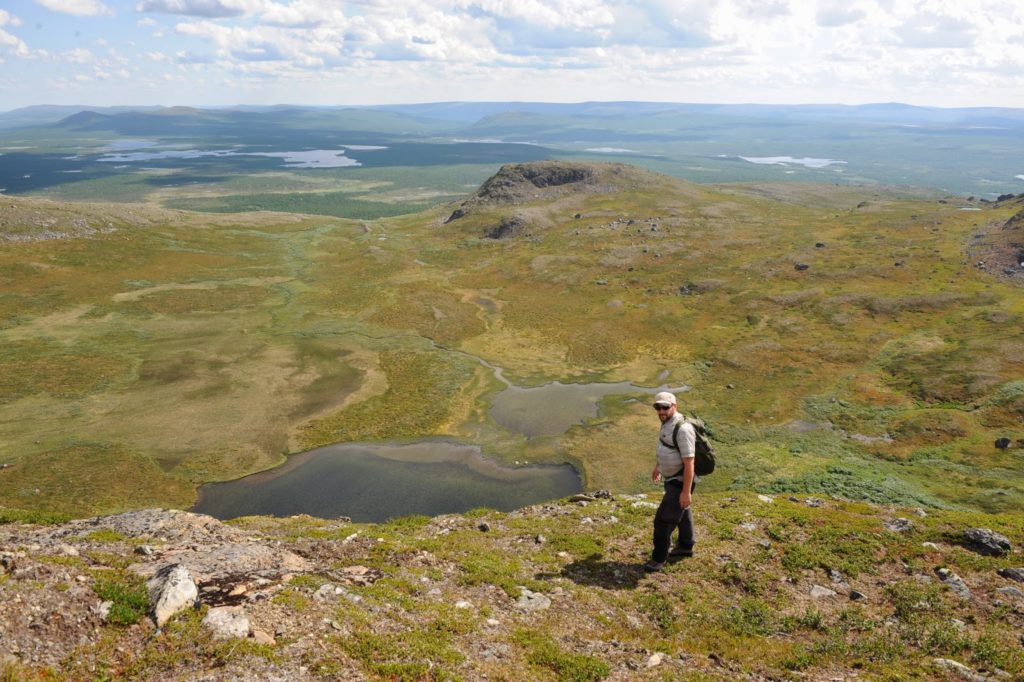 There are many remarkable places in the mountains.
Kráhpiesvárrie is one of them.
It is on the west side of the Laisdalen valley.
The nearest village is Gautosjö. 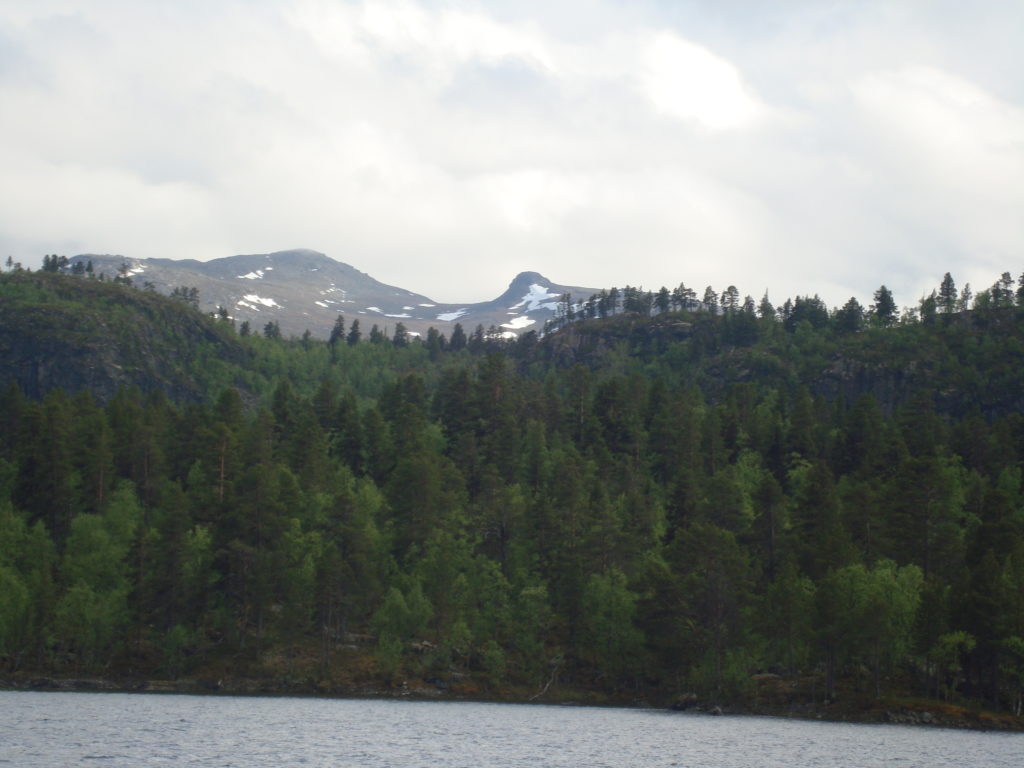 Kráhpiesvárrie is one of the least visited areas in the Swedish mountains. Anders Marklund, who runs the cottages in Gautosjö, can only remember a few walkers – every summer. “The ones that come to mind first are a group of people who like to go up the mountain and camp. I can’t remember meeting or seeing any other walkers.” Foto Maria Söderberg

The mountain here forms a strange ridge. It is like a stone dragon appearing out of the lake and stretching its dented fins over the surface of the water. At an altitude of 1,036 metres is the small peak of Tjårrás on Kráhpiesvárrie (also spelled Krappesvaare). Together with its twin peak Bielljátjh, about 50 metres lower and 300 metres away, the two bumps on the ridge form a little Lapponian Gate of their own. Through the opening to the west, in clear weather you can see all the way to Norway. A little closer there is a valley with small lakes, and about ten kilometres away the next mountain, Tjamuok.  If you look out through Kráhpiesvárrie’s own Lapponian Gate, the valley of Laisdalen spreads out before you. In summer it dazzles with its greenery. Apart from reindeer, some reindeer herders and occasional anglers, Kráhpiesvárrie is one of the least visited areas in the Swedish mountains. Anders Marklund, who runs the cottages in Gautosjö, can only remember a few walkers – every summer. “The ones that come to mind first are a group of people who like to go up the mountain and camp. I can’t remember meeting or seeing any other walkers.”  In the summer of 2011 I arranged a well-advertised walk on Kráhpiesvárrie. Anders Marklund was engaged to act as guide. The sun was shining and there was no wind.  Nobody came to the starting point in Gautosjö.  My eleven-year-old son, who hitched a ride back down to his grandmother in Arjeplog with a lorry when he was told that we had to climb a steep slope for the first hour, said: “Mum, I’m just not doing it.” A few days earlier we had spent a whole day walking from the top of Svaipa down to Bäverholm. That was twenty kilometres, and now he was worried about how long this walk would take. 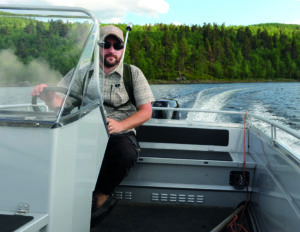 Anders Marklund take us in his boat to the other side of the Lake Gauto. Foto Maria Söderberg

Yet Kráhpiesvárrie was enticing. Why not start off anyway? Anders Marklund pushed out his boat. He was already counting on making the climb. It was a long time since he had been there in the summer.  The slope from Gautosjön, just to the right of the Järvtanden hillock, was admittedly tough going. But it was definitely not bad enough to keep you from getting up it. You can always stop for a breather.
The path was well trodden. I encouraged Anders Marklund to lead the way.  Ptarmigan scuttled around in the undergrowth and flew up in terror. They were protecting their eggs, and the chicks already hatched were not yet ready to fly.
Anders Marklund told me about the golden eagles that breed on the slopes of the mountain. A nest with young eagles once became actors in the film Ronia the Robber’s Daughter, based on Astrid Lindgren’s book.
After a climb of four hundred metres we reached the treeline. It is strange how suddenly this boundary comes in the terrain.
One minute you see stunted birch and willow, the next minute you are in the high mountains.

Then came the reward. On the sloping edge of Gájssjenienjuönnie, a part of Kráhpiesvárrie, the valley of Laisdalen lay before our feet. Every shade of blue and green. The weather was clear. Ten kilometres to the north-east was the Pieljekaise National Park, stretching out in its self-assured way. Two years before, the national park had celebrated its hundredth birthday. The main reason why it became a national park was the unique forests of mountain birch. Now they were splashing patches of lime-green colour.
A mountain stream bubbled at our feet. “What’s it called?” Anders Marklund, who had jumped over it perhaps a hundred times, thought for a moment.
“Maybe Gautobäcken?”
Once we reached the plateau, a remarkable walk began. Small lakes. Small bogs. Small mountains. It is as if the landscape had been pressed together in folds. If you want to go really far back in this description, we are witnessing the result of a collision.

The Norwegian-Swedish mountain range was formed four hundred million years ago when two continental plates collided.
What had the ice sheet actually achieved here? We walked a few hundred metres eastwards and found large granite blocks, the biggest of them six metres high. Before people knew that the ice sheet was able to transport huge boulders as it receded, there must have been many theories.
Who had placed these enormous stones in the middle of the mountain?
A god? A giant? A shaman?
It seems even more remarkable when you see smaller stones lying under the big ones. How did they get there? In the mountains of Arjeplog walkers find “hens”. These are large boulders resting on a few small ones. Other people call them “stone tables”.

There are several theories about how this happened; some ascribe a religious meaning to them, but most likely the ice sheet created these weird figures. We examine the boulders.
I tell Anders Marklund about the fascination with stones in Sweden. Several guests from Central Europe have asked about stones.
“Stones?”
“Yes, stones. They want to touch stones and photograph them. Preferably big ones, out in the middle of the terrain.”
At its greatest extent, the ice sheet reached as far south as today’s German and Polish coast of the Baltic Sea. In countries like Poland, Lithuania and Belarus, no boulders have been left in the landscape by any monstrous sheet of ice.
From Krappesvaare one can look out over a large alpine landscape. This was where the ice sheet receded last in Sweden. The climate became warmer.
Research at the Silver Museum in Arjeplog has shown that people lived in the area 9,800 years ago. Counting from Krappesvaare, there are traces a hundred kilometres away by the lake Rackträsk. That part of Hornavan can be glimpsed behind Akkelis at Hornavan.
There are several prehistoric remains in this part of Sweden. At Tärnasjön, three hundred kilometres to the south, archaeologists have found settlement sites that are dated slightly later than the finds at Rackträsk, roughly 9,000 years ago. Arrowheads and hearths have been found. A shelter, perhaps a hut, was given a stone floor.

But here?
Up on Kráhpiesvárrie there can hardly have been a settlement site. Perhaps they hunted?
Anders Marklund knows everything about hunting on Kráhpiesvárrie today. He guides hunters from various countries who have come to the interior of northern Sweden to shoot birds and other small game.
This summer the growth of birds has been healthy. There have been unusually many lemmings around, and everywhere we walk we find these small rodents, alive and dead.  Perhaps people hunted on Kráhpiesvárrie nine thousand years ago? It is not totally impossible, because the settlement site at today’s Tärnasjö is at an altitude of 605 metres above sea level. Where we are walking now is 900 metres above sea level.

Kráhpiesvárrie is in the Sami village of Svaipa. In late spring the reindeer herds pass here on their way to the summer grazing. The reindeer, naturally, attract predators. With a little patience one can see bear, lynx or wolverine.
What about wolf? No, Anders Marklund has never heard tell of anyone seeing wolf here.  And so we have reached the humps, that is, the two peaks of Tjårrás and Bielljátjh.
Finally I get to see them close up! But to climb them? No, other things attract us.
We continue walking as far as a small lake, and beside it the mountain rises once again. One boulder comes after the other. We climb carefully up the slope. Towering behind us is Ruvguotjåhka, 948 metres above sea level.
Anders Marklund asks me to watch out when I reach the edge. Below us is the valley of Tjotnedalen. 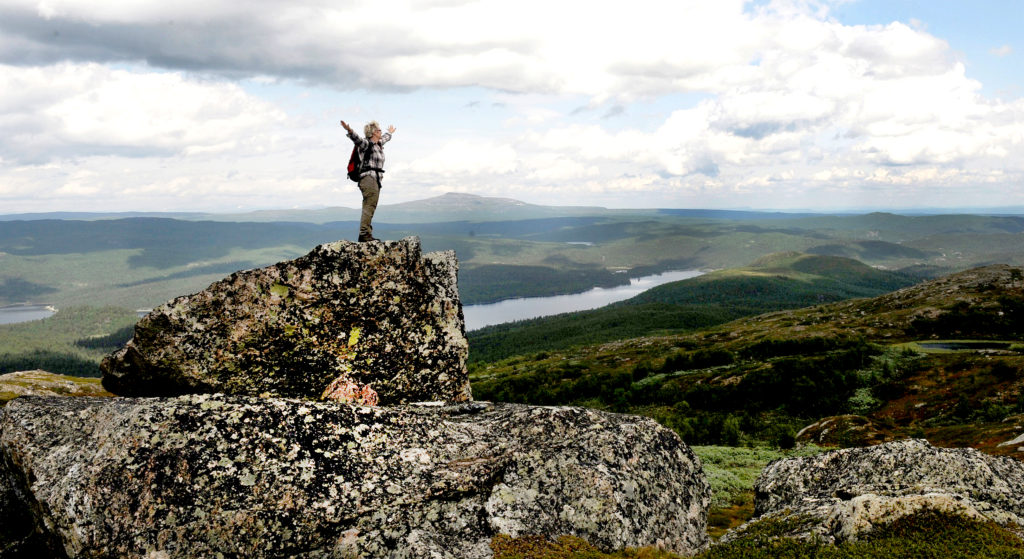 “You ought to see this!” Maria Söderberg to the tourist information office. Foto Anders Marklund

“There’s a drop here.”
I crawl forward and see what he means. A rock face falls straight down towards a bog. The precipice is perhaps slightly higher than 300 metres. The view towards the Norwegian mountains and the rivers in Krama is amazingly beautiful.
But my whole body is tingling with worry. The precipice! This is more than I can handle, and I thank my lucky stars that my son did not come along. At least not just now. My fear of heights makes itself felt. Instead I crawl down into the moss on the ledge and find a bed of alpine flowers.

The walk back begins, and the next place is warmly recommended for anyone who wants a unique view, perhaps to take a photograph, of the mountain world of Arjeplog.
I phone Anna Blomgren-Carlman at the tourist information office in Arjeplog.
“You ought to see this!”
She laughs.

Between the thousandmetre high Kráhpiesvárrie peaks of Gájssjenienjuönnie and Jålliek there is a patch of wetland where several small brooks flow.
Below our feet, we can let our gaze sweep over Laisdalen with its unregulated river and the southern peaks of Arjeplog. The road between Laisvall and Adolfström winds its way. It is known as one of the most picturesque stretches of road in Sweden.
It strikes me how accessible this mountain area is for walking. If it were not for the first steep slope, of course. But that effort feels distant when get down to the boat in less than half an hour.